It's been a busy couple of days with National Service Dogs, but we have our new dog: Lynyrd: 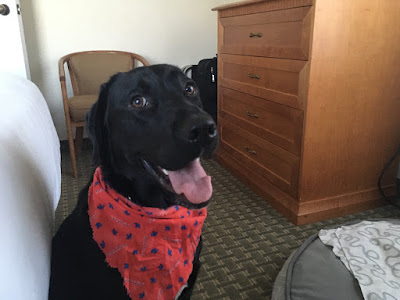 He was named after the band, so we've been calling him Mr. Skynyrd when we want to be formal.  He's a very different dog than Icon, in terms of personality.  Lynyrd is more attentive and eager to work, but far more easily distractable than Icon was.  Luckily, he comes back to us almost immediately, without much correction.

Lynyrd is a "grin" dog, who always seems to have a smile.  Though you can't see it in this picture, he has a white blaze down his chest and a little fringe of white around his lower jaw.  I think that will help Alex a lot when it comes to distinguishing between Lynyrd and Icon.  The two dogs are about the same size (within 2 pounds of each other) but Lynyrd is not the biggest dog in the class.  We have two monster sized fellows, each between 95 and 100 pounds.

The training is different as well.  Different aspects are being emphasized and some changes.  Last time we were told, don't worry if your dog eats grass, it helps with their digestion.  This time, we've been encouraged to stop them grazing.  There are areas where we obviously got sloppy in our follow-through as well, because we're having to work hard to do it properly (mostly with repeating commands rather than doing the ask once, verbal correction, physical correction structure that we're supposed to use when the dog isn't listening).

It's been bittersweet.  Lynyrd is a great dog, but being around so many black Lab mixes inevitably reminds us of Icon and how much we miss him.  We've gotten an update that Icon is very happy and settled in with his puppy-raiser who is over the moon to have him with her.  We're happy for him, but sad for us.  It helps that Lynryd is such a different dog, and he's definitely creating his own space in our hearts.

Posted by Jennifer Mackintosh at 05:00