Yesterday, we had another day of practicing control in a distracting environment as we went to St. Jacob's market.  Lots of in and out of buildings (despite a torrential rain).

We also practiced having the dogs tolerate having someone play with them in jacket (they shouldn't roll onto their backs or open their mouths) and having someone lie on them.  Icon did pretty well. 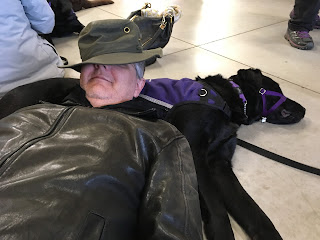 And he tolerated wearing the hat, and getting his photo taken.  Which earned him a treat. 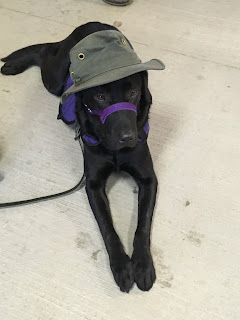 At lunch, we found out that the family who was having the challenge with WestJet got it resolved.  The family was offered an apology and an upgrade to first class.  The mom got the call during lunch, which brightened up her day considerably.

After lunch, we practiced the halt command and walking with a tether.  That's going to be an adjustment.  The trainer acted as Alex, dropping the handle and trying to bolt.  We walked behind Icon and gave him verbal direction.  Once the handle dropped, we told Icon to halt and he dropped, stopping "Alex" in her tracks. 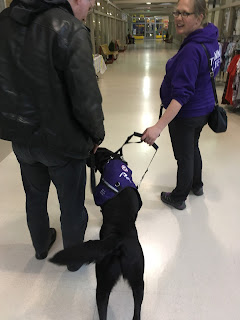 Icon was pretty tired at the end of the day.  He had a good 3 hour nap and woke up ready for attention and play.  It was snowing, so we cheated a little and had an in-room game of (careful) Kong toss. 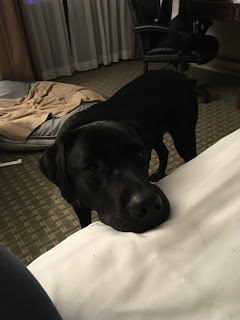 Posted by Jennifer Mackintosh at 04:08