Today was a rainy day so we had more inside work and lectures than outside.  Tomorrow we'll get to spend the day outside. 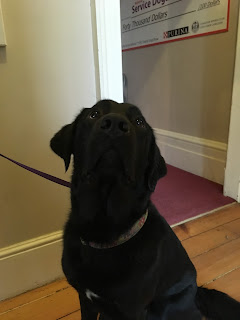 We met Icon's brother, Iggy, who is in training as a post-traumatic stress service dog.  Most of Icon's litter mates are in that program.

After a brief talk about the various challenges that can arise with taking a service dog to school, we practiced the food refusal part of the handler test.  This time, Icon did much better (or rather we did much better). 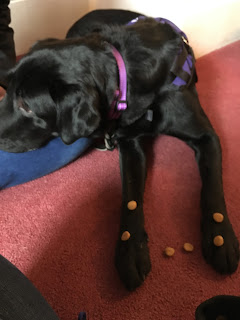 He was able to ignore his kibble on his paws and on the floor, when it was dropped on him and in front of him.  He kept his attention on Dave, even though he clearly really, really would rather be eating the food. 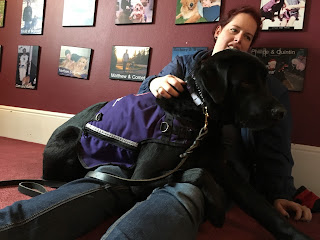 After practice, we had a parent panel with parents who have received service dogs.  They couldn't say enough good things about how the dogs have helped their children, but acknowledge there are still challenges.  One of the biggest issues is that the dog makes your family the center of attention, and people assume they have the right to question you about your child's diagnosis, abilities and anything else.

I asked them what advice did they wish they'd gotten before bringing their dogs home and these were some of their answers:

- It's a lot of work to have a dog and you won't be perfect at it.  But you're still good parents and the fact that the dog is helping doesn't mean that you've missed something.

- With the dog, your child will get experiences you would have never imagined were possible.

- It's important to be the alpha dog when dealing with rambunctious children or poorly behaved other dogs.

- You will be getting extra security checks at the airport.  (Apparently some people have been using people with disabilities as drug mules.)

- You have to keep practicing the skills the dog has learned at home.

We finished off the day with an independent excursion, a trip to Walmart and dinner at Applebee's.  We were worried about whether or not the dog would be accepted but there were no issues.  Icon curled up under the table and behaved like a perfect gentleman. 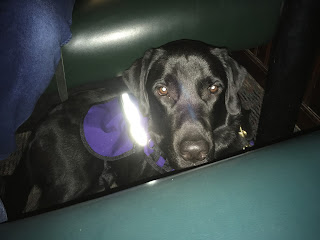 Posted by Jennifer Mackintosh at 02:48