Another Halloween of fun and whimsy (and lots of work).

Nathan, little Whovian that he is, wanted to be the 11th doctor from Doctor Who.  I made him his jacket, bow tie and fez. 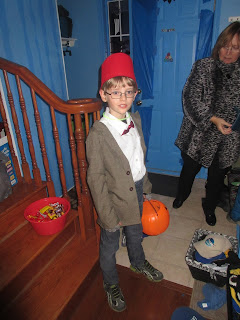 Alex reprised his role as Super Grover 2.0.  I had to make new gloves, a new sash and a new belt.  Luckily the muppet costume, the cape and the hat still worked. 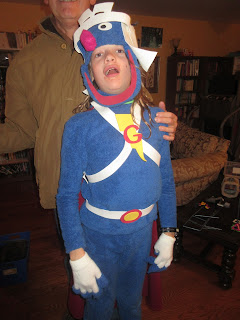 We turned our front door into a TARDIS.  Which ended up being quite the crowd pleaser.  We actually got a few walk-ups during the day from people asking to take pictures. 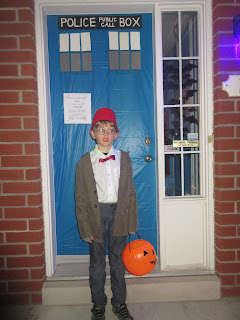 We added a Dalek pumpkin to the mix.  That was honestly the most challenging part.  I used a toy wand for the optic rod, a glowstick for the firing arm and made my own (sort of) to scale plunger for the sensor.  Then we put it on a stool and wrapped the stool in bristol board, with circles covered with tissue paper.  With a light inside, it glowed and looked rather cool.

We finished off with pepper lanterns done as Cybermen. 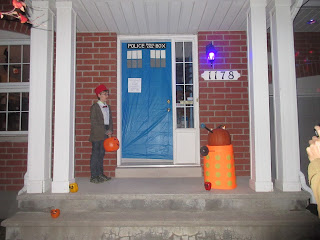 Dave added his own touch with rotating disco lights, another popular choice. 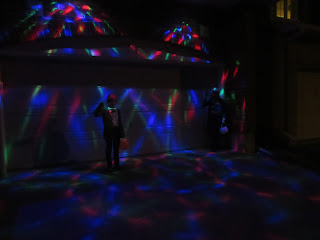 The boys didn't do a lot of trick or treating.  Alex gave up after 20 minutes and Nathan did another 5-10 minutes after that.  Alex refused most of the treats being offered, which led to confusion from those handing out, and in a few cases, offense.  I got into an argument with my mother about whether or not Alex should be encouraged to simply politely accept the candy.  Given that most people don't recognize that he has autism, his "No" sounds more like a personal rejection.  This is one of those grey areas for autism behaviour.  On the one hand, he is expressing his preference (he doesn't like candy or chips) but on the other, he's violating the social expectation of the evening.  Since no one was expecting him to eat the candy, I felt that encouraging him to participate was the path of least resistance and most social acceptance but I got quite a strong resistance and didn't have the energy to push back against it.

Nathan's big moment came when we stopped at a house where someone was waiting all in black.  They triggered glowing red eyes and walked toward him, scaring Nathan quite a bit.  But, he didn't get upset and want to call a halt.  Instead we encouraged him to pull out his sonic screwdriver.  The man in black pretended to be grievously driven back which gave Nathan a great big grin.  Good fun all around.  He was also tickled when someone immediately recognized his costume and said he was her favourite costume of the night.  She gave him an extra treat for that.

We ran out of candy around 8:30 at night and closed up shop.  We took down the TARDIS right away since a few people were trying to open the door on their own.  (Granted, the sign on the TARDIS does say to open the door for assistance, so I can understand the confusion.)

I always go through a lot of work for holidays for the boys.  But it's worth it for them to have something special to remember.
Posted by Jennifer Mackintosh at 06:18

Email ThisBlogThis!Share to TwitterShare to FacebookShare to Pinterest
Labels: holiday