For the last several months, Alex has been saving up his allowance for a Bruder Cement Mixer truck. 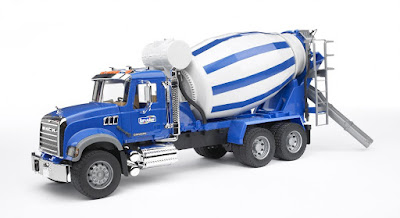 A few weeks ago, he seemed to lose interest in the savings.  I discovered why over the holidays: his grandparents had spotted the truck on sale and bought it for him.  We found it on a shelf at their house.

This was quite a frustrating discovery, more so than it may seem on the surface.  Alex doesn't get interested in too many toys.  He's just not a particularly acquisitive child.  He'd worked very hard on his savings, giving up trips to the Dollar Store, which he enjoys.  We were looking forward to counting up his money after the holidays and taking him to finally pick up his truck.

Dave and I ended up being up until about 2 am that night, trying to figure out if there was any way to salvage this.  We'd used this as an opportunity for delayed gratification, planning and being self-sufficient and independent.  After getting his Christmas money, Alex has $ 130.  Going into a toy store and being able to just pick something out isn't the same as saving for it.  We can't take the money retroactively, especially since there has been such a gap between the truck being bought and discovering it.  Alex isn't likely to find something else which interests him as much as the truck (especially since he's gotten tons of presents).

Aside from the disappointment of losing this teaching opportunity, there's also the frustration with the lack of communication.  We had told his grandparents about the truck and that he was saving for it.  We'd even told them we didn't want anyone to buy him the truck for Christmas.  If they had contacted us when they saw the truck on sale, then there were a number of options we could have taken, including getting his money and taking him to the store right away.

They are sorry for having made the mistake and I know it wasn't deliberate, but it doesn't change the fact that this opportunity is gone and not likely to come again for quite awhile.
Posted by Jennifer Mackintosh at 05:34