This year's Hallowe'en costumes turned out particularly well, I believe. 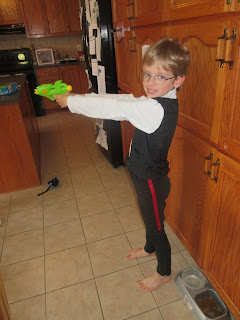 Mr. Nathan was Han Solo.  He already had the turtleneck, I made him the vest (including smuggler pockets) and then tightened a set of sweatpants for his pants.  I added a "cuff" around his knee for Solo's knee-boots and the red stripe.  Nathan really liked his gun belt with the low slung holster. 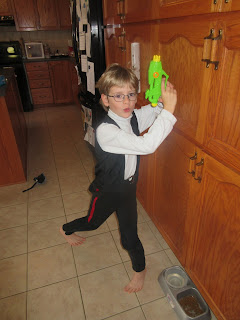 Alex was Super Grover 2.0 (from Sesame Street).  That one presented more of a problem.  We already had the cape, so that part was simple.  I made the pants and top out of blue towels, then the harness and belt out of craft foam sheets.  The gloves are regular white knit gloves with the Grover fingers (more towel) on top. 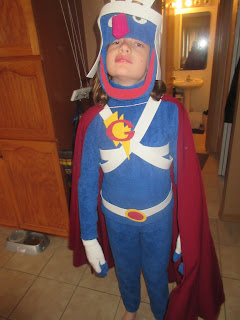 The helmet was the hardest part for me to figure out.  I used a Kinder suprise egg wrapped in felt for the nose and craft foam for the eyes and mouth.  I rolled up towelling to do the "chin" for Alex to look out of.  The helmet was all craft foam and while I wasn't entirely happy with it, I think it turned out well. 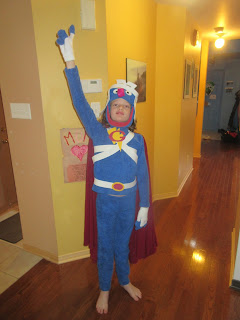 The two of them had a lot of fun.  We went trick or treating for half an hour, managing to make it up and down most of our street.  Together, they collected a shopping bag full of treats (although I'm sure they won't be eating most of them).  It was a nice change from last year's "two houses and we're done" approach.  Halfway through, Alex decided he didn't want any more chips, so if someone started to give him a bag, he'd tell them "No chips, please." 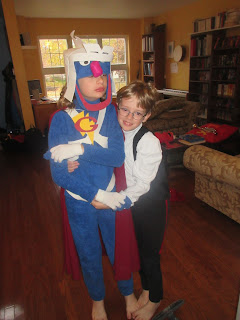 Dave and Nathan did the decorations since I was away at Can-Con.  It's the first year I haven't wholly coordinated Hallowe'en and while I feel a little sad at not getting to participate in everything, I think I hit all the important things.  I rushed back for trick or treating and took them out.

Dave found these rotating "disco" bulbs for our lights, which turned out to be a big hit in the neighbourhood (although difficult to photograph).  It was real easy to spot our house with all the light and motion.
Posted by Jennifer Mackintosh at 05:10