We began our final day in a leisurely fashion.  Nathan and I had breakfast in the hotel cafeteria (Mickey shaped waffles), we went swimming in the guitar-shaped pool and he had another long play at the arcade.  Dave still wasn't feeling well but he agreed to join us. 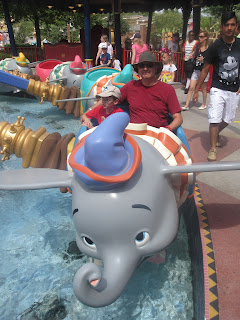 We began with the Dumbo ride (go, Disney classics!) and then the Speedway.  This time I got to drive and those little cars are a lot harder to steer than they look.  We had some lunch and then moved on to the Buzz Lightyear Star Command ride again. 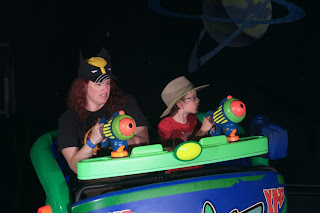 This time, Nathan made Ranger First Class and took his picture with the imprisoned Emperor Zurg. 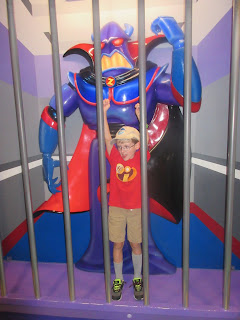 Next we went on It's A Small World.  There was a 15 minute wait, but the crowds bothered Nathan so he asked to use the disability pass.  I found the FastPass line (which is usually where you sign up) on the opposite side of the pavilion from the regular line but was told I had to sign up at the regular line.  I started to leave to do it but the cast member changed his mind and told me and Nathan to go ahead.  Another nice, touching Disney gesture.

Nathan liked the ride.  I let him film it with the camera, so I have a Nathan-commentary version.  There's a lot of detail in it, so there's always something to look at.

After Small World, we went on the Peoplemover again, and showed Dave around Tomorrowland.  It's too bad Alex didn't discover that ride, he probably would have liked it.  Something to consider for next time. 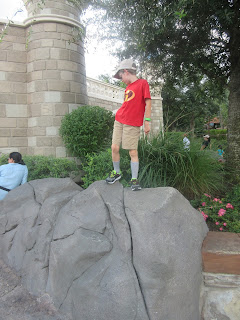 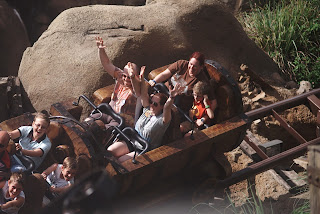 We finished the day with gentler fare.  We flew over London with an enchanted pirate ship for Peter Pan's ride and I got another Nathan-commentary video for the central carousel. 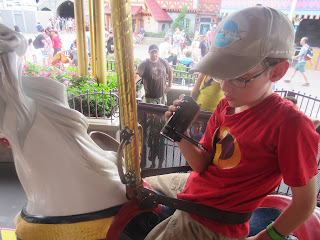 We discovered Nathan is not the rightful king of all England, so my dreams of being Queen Mother will have to wait until he reaches Evil Genius levels and conquers the world. 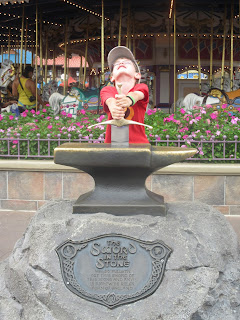 We caught the boat across the lagoon to Mickey's Backyard Barbecue at the Fort Wilderness campground. 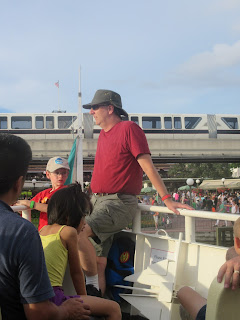 I'll be honest, it was very loud and all of us were feeling a little overwhelmed so we didn't each much of the buffet.  I was glad I had Nathan's noise cancelling headphones, although Dave wished we had another pair for him.  But Nathan got his picture with Minnie and Mickey and saw the trick roping demonstration.  He and I even did a little line dancing together. 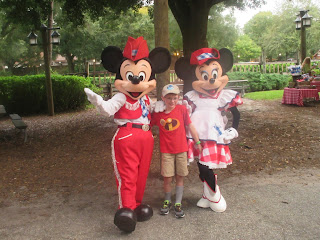 It was a good end to the vacation and we flew home with sore feet, heavy bags and big smiles.  Exactly the way every vacation is supposed to finish.
Posted by Jennifer Mackintosh at 03:26