Disney Day 6: Back to Epcot

On Day 6 we went back to Epcot after a relaxing morning at the hotel watching television and playing at the arcade.  (And getting some laundry done so we all had clean shirts again.) 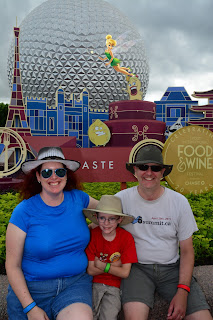 We arrived and took a family photo with one of the Disney photographers. 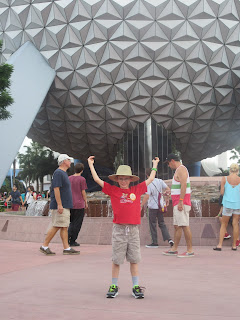 Nathan wanted to pretend to hold up Spaceship Earth, which was the ride he was most excited about.  This time he looked carefully at the animatronics and realized they were not in fact people in costume. 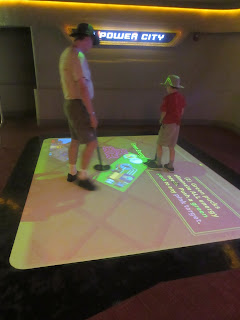 After the ride, he played a number of games at the Innovation Center, including this one which was a kind of digital shuffle board where the players move "clean energy" chits to new real estate developments.  It was an interesting concept but fell a little on the preachy side for me. 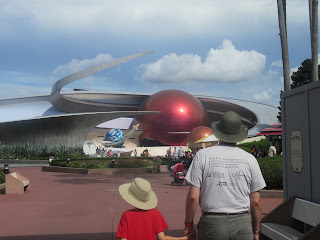 We went to Mission: Space, a space simulator ride which Nathan was quite excited about.  Until he sat through his third warning about how people shouldn't ride if they were afraid of dark, tight spaces.  After that, nothing we said would convince him to try the ride.  Instead he played at Mission Control for awhile.

He did ride the Test Track, designing his own car (very powerful but not efficient).  After we went to see Turtle Talk with Crush (from Finding Nemo).  The animated turtle actually interacted with the audience, which makes me suspect it is a motion-capture animation of some kind with someone doing it from behind the screen.  Crush asked Nathan (little dude with the red shell) some questions about the human world, including what an airplane was. 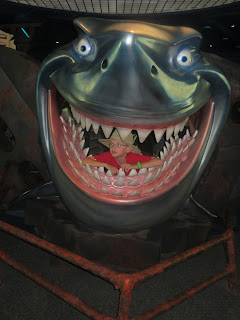 We saw the giant aquarium and Nathan had his picture taken with Bruce the Shark.  We also rode the Under the Sea ride with Nemo and Friends.  (I particularly loved Pink the Starfish asking if she could come with us because she had to constantly listen to the finale song.) 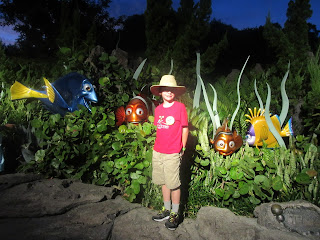 We had supper at the Coral Reef, a restaurant attached to the aquarium.  As we ate we could watch the sharks and rays (and occasional divers).  This was actually the one meal at Disney which I wasn't impressed with.  The food seemed a little low-key and limited for the experience and our waiter was distracted and preoccupied.  (He took away one of my plates as he walked by the table, as I was still eating from it.)  But it was very much the exception through the whole trip. 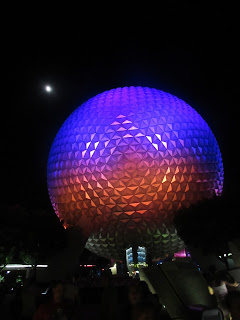 After dinner, I thought we could go see Journey to Imagination with Figment and the jumping water fountain again (I still had hopes of trying the fireworks) but it turned out they were closed.  Rather than push it, we just went back to the hotel.

The movie under the stars wasn't working that night, so we found something on Disney Family channel (we got all of the Disney channels at the hotel): The Muppets.  I wasn't paying too much attention so I was quite surprised when an ad for Crimson Peak came on, scaring the heck out of Nathan.  (It's an R rated horror film involving ghosts and demons.)  We got him calmed down but I was definitely annoyed at whatever programming director approved an ad for a horror film during a timeslot and film aimed at children and families.

We had one day at Disney left before heading home and we wanted to have it be a great day to finish with.
Posted by Jennifer Mackintosh at 05:21