We started Day 4 very casually.  We slept in and Nathan got to play in the arcade.  His favourite game was a Battle of Britain simulator where he's flying a plane during the Blitz and shooting down enemy fighters.  (Incidentally, watching him play throws extreme doubt on the Ender's Game series.  8 year olds might have fast reflexes, but they do not have the concentration to protect the world from space invaders.) 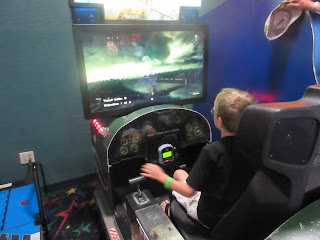 After lunch, we headed out to Disney Hollywood Studios.  Our hope was to sign Nathan up for the Jedi training program.  (It's a 20 minute audience participation event, where the kids learn to use lightsabers and are tempted by either Darth Maul or Darth Vader to join the Dark Side.)  When we arrived, we discovered the program was full but were offered the opportunity to try a waitlist.  We could then show up before each of the 14 daily shows and see if a child didn't come. 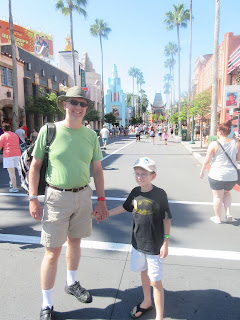 I explained to Nathan how it worked and asked him if he thought he would be okay or if he would throw a tantrum.  He said he would be fine, so we signed up.  We tried one, which involved us having to sit and wait for over a half hour (and then not getting an opportunity to go).  Nathan couldn't tolerate it.  He had a full meltdown, crying and saying he wanted to go home (to Ottawa) immediately.  We waited with him until he calmed down (I thought his upset was understandable and he was crying but not violent) but I didn't want to try the waitlist again.  I even had my doubts about trying to come to Hollywood studios early on a following day to sign up.  Only 60-70 kids are permitted to do the training each day and I'm sure it fills up fast.  It would be a lot of effort without a guarantee of a result.

I spoke to the people running the program and explained that Nathan had autism and couldn't tolerate the uncertainty.  I told them about the meltdown and how just one waiting session jeopardized our entire trip.  They said there wasn't anything they could do (although they seemed very apologetic).  I left a suggestion with Guest Services that there needed to be some kind of accommodation for kids with disabilities.  I'm fine with waiting and if Nathan could have managed it and really wanted the training, we would have sat in that pavillion all day.  But in the end, it wasn't to be. 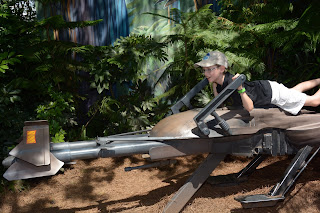 Nathan did eventually cheer up and enjoy the rest of the opportunities at Hollywood Studios.  He got his picture taken on a speeder from Return of the Jedi and we went on the Star Tours ride and rescued a Rebel spy from the Empire. 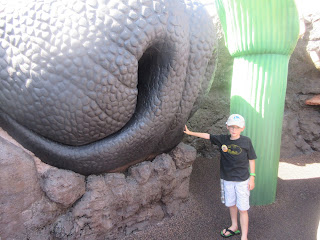 We went to the Honey I Shrunk The Kids play area with its giant toys.  This is Nathan next to the giant dog nose, which must have had fans inside because air went in and out and we could hear snuffling sounds. 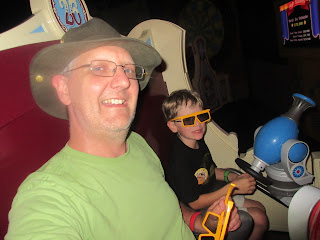 We rode the Toy Story Midway Mania, where you can shoot digital guns at the displays in a series of Toy Story themed carnival games. 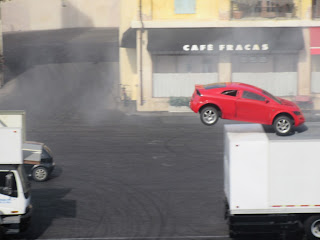 We saw Lights, Camera, Motors, the Extreme Stunt Show, which explained how Hollywood produces action sequences.  They showed us the safety rigs and the different types of stunt cars (including ones with the frame on backwards and remote controls).  They also demonstrated how they film action sequences in small bursts to keep everything and everyone safe.

We also saw MuppetVision 3D, which had a combination of a 3D movie, animatronics (Stadler and Waldorf were awesome) and costumed Muppets (Yay, Sweetums!).  It was really impressive, although Nathan got confused because Kermit told us it was a "test" of a new visual system.  He thought there was still another movie after that.  I explained the "test" was the movie (with my breath held, wondering if I was triggering another tantrum) but he accepted it okay. 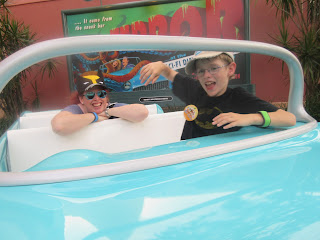 We finished the day at the Sci-Fi Drive In Restaurant, which has car shaped booths and shows teasers for 50's and 60's B-movies (most of which I've seen because I had a weird childhood).  I even saw a teaser and poster for This Island Earth, which was beautifully lampooned for Mystery Science Theatre 3000.  (It's a hilarious way to watch B-movies.) 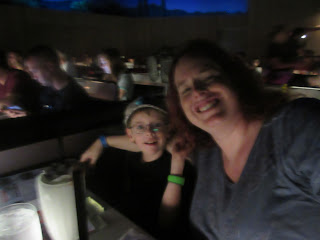 Dave was starting to fade and thought he might be getting sick.  We quietly discussed it and decided it was not worth another potential meltdown to try for more Jedi training, although part of me really wanted to be able to give Nathan that experience.  We decided it was just too hard for him to understand and accept.  I'll have to look into the 501st Legion when we get back to Ottawa and see if they do anything for kids.
Posted by Jennifer Mackintosh at 05:43