Today started at an obscene 3:45 am to get us to the airport on time.  Nathan was initially reluctant to wake up but once he remembered why, he was eager to go.  We put his "Child with Autism - please handle with loving care" t-shirt on in case of meltdowns but he ended up being one of the best behaved kids on the plane. 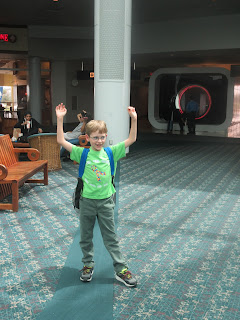 We arrived at Orlando airport in the early afternoon and Nathan was very excited about the special "space" shuttles which the airport uses to transport people between terminals.  (The red circle behind Nathan is the shuttle window.) 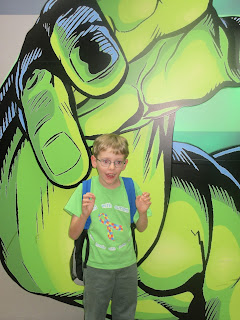 Nathan goofed it up in front of the giant Hulk hand.  Apparently Marvel signed over their theme park rights to Universal, which explains why Disney doesn't have a Marvelworld yet. 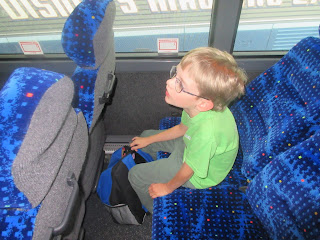 Nathan on board the Magic Express, enthralled by the classic Disney cartoons.  It was wonderful to see him so excited about everything.  He kept saying "Oh My God!" over and over at each new delight. 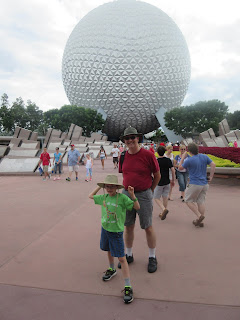 After leaving our things at the hotel (and asking them to fix our leaky bathroom faucet, which they did very promptly), we headed over to EPCOT.  Nathan was fascinated by Spaceship Earth (the giant geodesic dome) and insisted on riding it first. 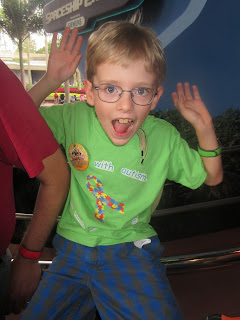 Since the wait time was only 5 minutes, I didn't bother to use the Disability Pass.  Nathan did very well waiting in line, though Dave and I tried to be a buffer for him so he didn't feel too cramped. 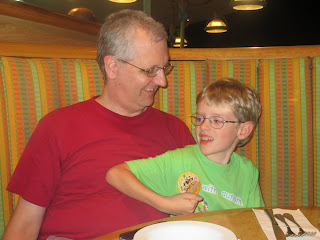 After the ride, we went to the Garden Grill for supper.  It's a revolving restaurant inside the "Land" pavilion at EPCOT and features several characters. 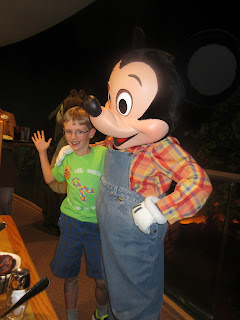 Nathan got to meet Mickey. 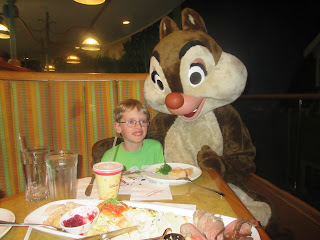 And Chip, who tried to steal some of his dinner. 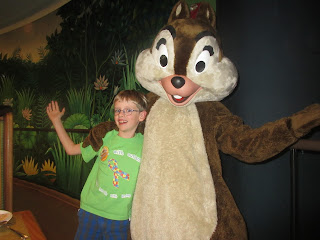 And Dale, who was happy to mug for the camera. 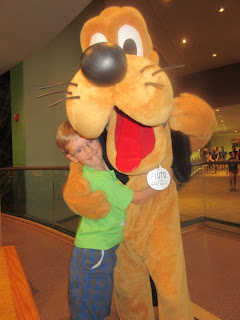 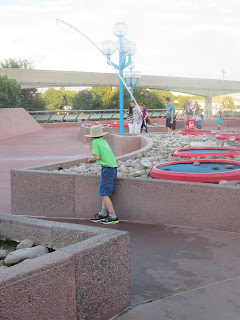 After supper, we saw the Circle of Life with the Lion King characters.  (A little environmentally preachy and unsubtle, but beautiful visually.  I recognized a great deal of the footage from the old Disney nature documentaries.)  After Circle, Nathan discovered the jumping water fountains. 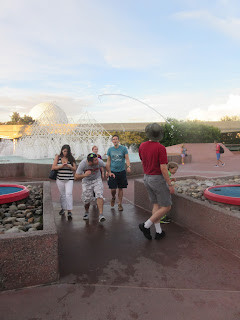 He and Dave had a great time trying to "catch" the leaping water. 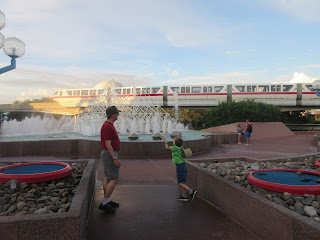 After we went to the 1980's 3D movie, Captain EO, starring Michael Jackson and Angelica Huston, along with creations from Jim Henson's Creature Shop.  It was produced by George Lucas and directed by Martin Scorcese.  It definitely had the feel of a classic Lucas/Henson film with some Tron and Star Wars elements. 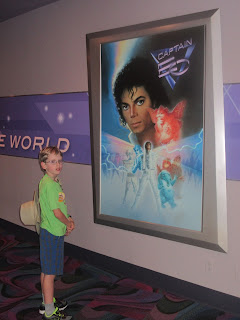 The day ended on a bad note.  Nathan had been doing so well that I decided to push him just a little more to see the EPCOT Illuminations firework show which I thought started 15 minutes after the movie ended.  (My mistake on that, it was actually 45 minutes.  If I had known that, we would have gone home right away.)  Nathan hit his wall and threw a massive tantrum, hitting and kicking in a frankly shocking display.

This left me with a real dilemma.  Although I realized he had been pushed too far, I couldn't risk reinforcing the behaviour.  I restrained him to keep him from hurting himself or anyone else and waited for him to calm down and ask calmly to go home.  It was embarrassing (although people, especially the staff, were quite helpful) and it took an agonizing 40 minutes for him to work his way through.  We left just as the fireworks show was starting and got him back to the hotel as quickly as possible.

I made a mistake in reading how tired he was and how quickly he would go from accommodating and eager to whirling tantrums.  In all though, I still think it was a good day.
Posted by Jennifer Mackintosh at 06:31