We started off Day 2 with a bang, introducing Nathan to his very first roller coaster: Expedition Everest, which features dark tunnels, an animated Yeti attack and surprise backwards tracking.  It's an intense first roller coaster, but he still liked it, until Dave said he didn't.  At which point, Nathan changed opinion to match Daddy. 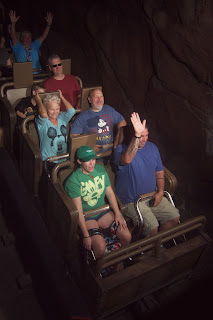 Nathan is in the back row, hiding behind the woman in the blue shirt with the mouse ears. 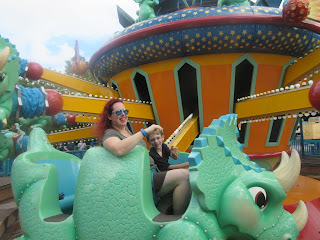 After we found a ride which was more his speed, the flying triceratops ride.  Rather like the Dumbo ride, but with triceratops instead. 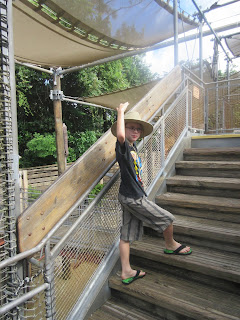 Then he went off to dig at the "paleontology" site with slides and climbing equipment. 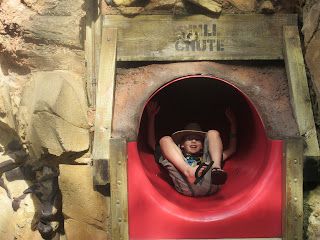 After that we saw the Finding Nemo live show, which had some impressive puppetry, had lunch at Restaurantosaurus, then rode Dinosaur (where Nathan ensured I had an edge seat so I could get eaten by the Carnotaurs first). 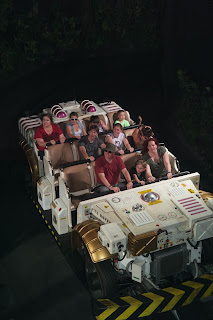 We finished up with the Kilimanjaro Safari ride, a 2 week safari in 20 minutes. 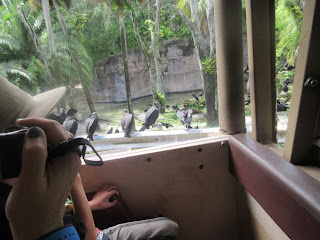 Disney went above and beyond for the Safari ride.  I had used the Disability Pass to reserve us a time but when we went up, the FastPass lane (where you go) was stretched out past the entrance.  I asked the cast member how long it would be and they told me about 20-30 minutes.  (The standby time was over an hour at that point.)

I told the person that I didn't think we'd be able to do it as Nathan's issue wasn't so much waiting as potentially freaking out when crowded into lines for extended times.  Since he was already tired and I'd had one meltdown, I wasn't willing to risk it.  The cast member asked me to wait a minute and got a superior.

The superior asked me to explain the situation again and then asked if it would help to be escorted to the front.  I said it would, then offered to wait an extra 20 minutes so Nathan wouldn't be "cutting" the line.  He said it wasn't necessary and whisked us up front.  Nathan ended up really enjoying the experience. 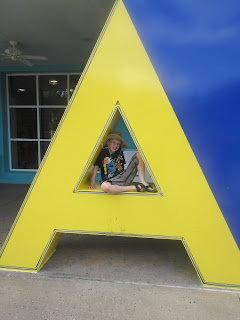 After the safari, and mindful of the previous night's tantrum, we went back to the hotel to have a rest for a few hours before our dinner reservations at Chef Mickey's.  Nathan immediately wanted his picture in the giant "A" of "All Star". 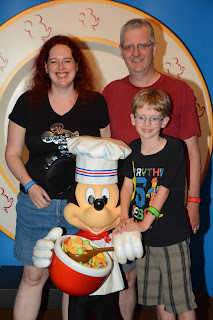 Chef Mickey did an awesome job.  Nathan enjoyed the monorail ride (although not as much as Alex) and they had us seated with a minimum of fuss and wait.  We were right next to a lovely couple on their honeymoon who were just as excited about the characters as Nathan was.  He managed to meet the full set of the classic Disney five. 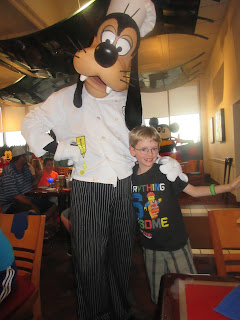 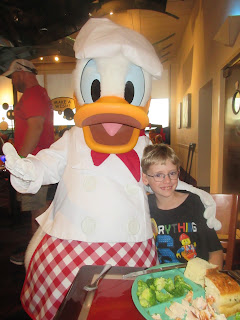 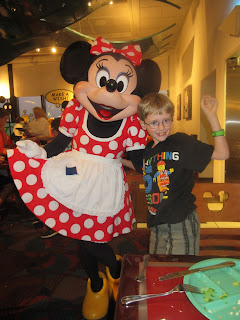 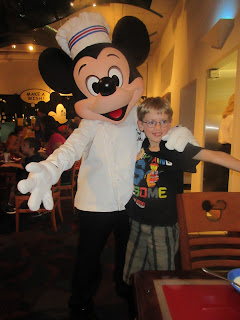 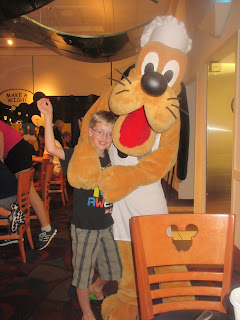 After we went back to the hotel for an early night.  Dave commented that I was constantly striking up conversations with people.  It's true, I often found myself chatting with people on the bus or while waiting in line.  It didn't strike me as odd but given how the rest of my family can go for days on end without talking to anyone, I suppose I can see his point.

Sometimes I miss the art of conversation rather than directed communication.  I feel out of practice and yet somehow desperate for the contact.  Being the only neurotypical in an autism family gets pretty isolating sometimes.

We finished off the day by watching the classic Cinderella under the stars.  Nathan was quite awed by the giant inflatable screen and thrilled with getting to lie out on beach chairs beside the pool.  He didn't fall asleep, but he was awfully quiet through the whole thing.  A much better end to the day.
Posted by Jennifer Mackintosh at 03:50