Yesterday we had to say goodbye to Isa, our seventeen year old cat.  It was expected, she was old and had been having increasing health problems over the last six months. 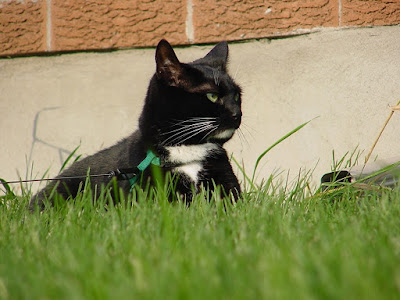 This is the first time the boys have had to deal with a death.  We tried to prepare them for it, explaining that Isa was very sick and in a lot of pain.  We gave them a chance to say goodbye.
Nathan goes back and forth between forgetting that she's gone and being upset.  I'm not sure how much Alex truly understands about what I told him.  This morning he's been edgy with lots of whining and complaining, which I suspect may be signs of stress.
We did a candlelight vigil for her last night, going through photos and telling stories about her.  When we get her ashes back, we will have a funeral.
Perhaps this is a little elaborate for a family pet, but she was a big part of our lives and I wanted to reassure the boys that she isn't being forgotten.  Often we don't want to talk about death or those who have passed, because it hurts.  But to a child, it can seem even more scary that the person disappears and then no one wants to talk about it.
Part of it is selfish.  I miss her.  I've been with her for her entire life since she was born to a roommate's cat when I was in university.  I was there when she was born and I was there when she took her last breath.  I'm glad I was able to do that although it was very hard for me.  She was a good friend and though I'm sad that she's not here, I'm glad that she's not in pain any more.﻿
Posted by Jennifer Mackintosh at 05:08

Email ThisBlogThis!Share to TwitterShare to FacebookShare to Pinterest
Labels: Life