Walking With Dinosaurs: The Arena Show

The family won tickets to the Walking With Dinosaurs Arena Show on the weekend.  Nathan likes dinosaurs and Alex likes the Canadian Tire Centre, so we went ahead with it.  I was braced for something a little hokey and clumsy.  I really enjoyed the original BBC series.  It had some amazing CGI work (realistic feet movement, always a bonus!).  But you can't have CGI quality with a live show.

But you can come pretty darn close.


The smaller theropod dinosaurs were done by people in costume. 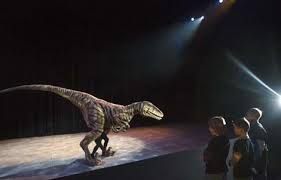 The larger ones had a base platform that moved with them and I presume several people were inside to control the mechanisms.
Nathan loved it and even Alex was entertained (although he got bored during the talky science-y bits).  The show was a little loud (the T-Rex roars shook the seats) but the boys both did well with it.
It gets my recommendation for a good family night out.
Posted by Jennifer Mackintosh at 19:01