Anyone with a child knows how monotonous and repetitive children's books can be.  Everyone's problems can be solved with a listen and a smile, bullies always turn out to be friends in disguise and the plot can usually be guessed from the title and first page.

Now, before I get lynched, I realize this is part of what children's books are supposed to do: present a simplified and idealized world to teach lessons.

However, once in a while, there comes a book which appeals to both the adult and the child.  And somehow, my sisters in Toronto always seem to find them.

First there was I'd Really Like to Eat A Child by Sylvaiane Bonnio. 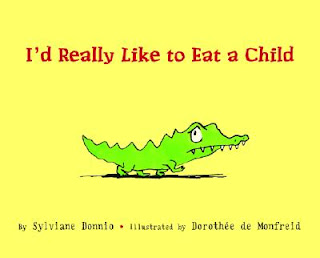 I opened it expecting to find the heart-warming tale of a little crocodile who wants to eat a child but discovers they're much more fun as friends.

Instead, I got the heart-warming story of a little crocodile who sets himself a goal and figures out how to achieve it.  No children were actually eaten, but he realizes he has to eat healthily in order to grow up big and strong enough to eat a child.

Goal-setting, perseverance in the face of obstacles, promotion of healthy eating ... all the sorts of things a parent is looking for to teach their child.

And now we can add This Is Not My Hat by Jon Klassen to our list: 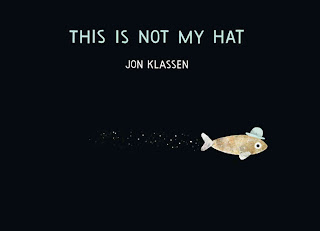 The story of a little fish who learns that sloppily planned crime doesn't pay.  He steals the hat from a larger fish, justifying it to himself.  The larger fish follows him and gets the hat back.  (It is implied that the little fish is eaten but not shown.)
A great story to spark talks about how it isn't right to take things which aren't yours, different points of view (an excellent exercise for children with autism, who can tend to assume that everyone knows what they know) and how sometimes people can be tempted to do things which they know aren't right.
Posted by Jennifer Mackintosh at 18:31