Confessions of a FanGirl

I spent my Friday and Saturday geeking out at Comicon, by which I mean I stood in a lot of lines and saw celebrities from a distance (mostly). 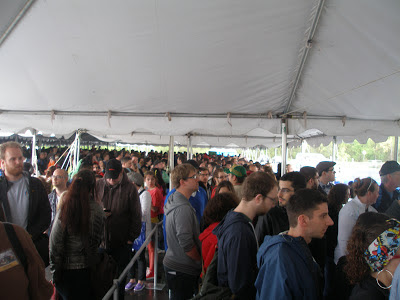 When I say lines, I mean lines.  This is just a glimpse of the crowd waiting to get in.

My best celebrity-from-a-distance picture: Kevin Sorbo of Andromeda and The Legendary Adventures of Hercules.  Of course, I did get quite close to a few celebrities.  I inadvertenly cut between Jewel Staite (Firefly) and her security escort.  I didn't realize what had happened until a security guy cut in front of me and then I looked and realized: OMG, it's Jewel Staite!  Two feet away from me!  (And despite what Dove commercials claim, she really is that pretty and that nice.)

Aside from the exciting line-waiting and more line-waiting, one of the big perks of going to Comicon is to see the amazing costumes people wear.  For the non-geeky among my readers, these are not paid professionals, they don't get free admission.  They do this entirely of their own free will.  I have over 3 dozen costume photos but here are some of my favourites. 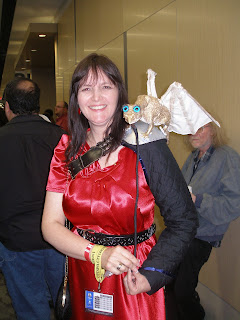 This adorable draconis liliputis was a puppet which his owner could manipulate from her waist.  She had him peering around and interacting with the crowd. 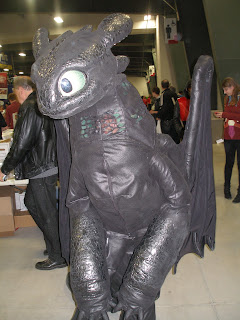 This larger dragon (I'm guessing of Pokemon fame) walked around on all fours, staying in character to the delight of many of the children and adults. To my geeky shame, I have no idea who these women are portraying but the detail was amazing. 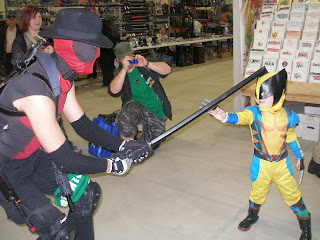 Deadpool and mini-Wolverine.  So adorable I couldn't resist.  Deadpool was coaching the little guy on how to pose for the photo.  (Come on, pretend to block my sword.)  The amazing thing, these two weren't together.  They just happen to cross paths.  Wolverine's mom and dad were off to the side, out of frame.  This is one of the amazing parts of Comicon, everyone is determined to make sure that everyone else has a good time. 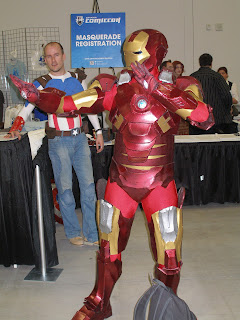 This Iron-Man costume had LEDs in his chest and hands. 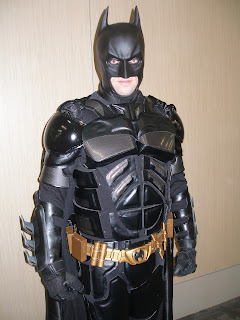 Best Batman costume ever outside a film set. 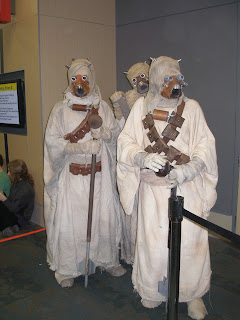 These three fellows were in the wrong spot for a line and when the volunteer discreetly asked them to leave, they said: "We will return, and in greater numbers." 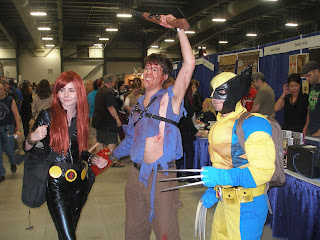 From left to right: Jean Grey (X-men), Ash (Evil Dead and Army of Darkness) and Wolverine. 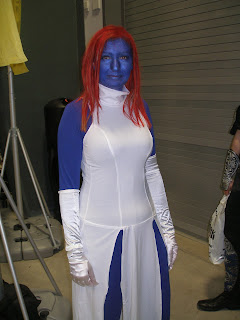 Mystique from X-men.
I managed a few panels.  Kevin Sorbo's Q&A was hilarious and interesting.  I hadn't realized he'd suffered 3 strokes while filming Hercules and still has impairment.  He's actually going to speak to a neuroscientist convention after this.  He was asked the somewhat predictable: In a fight, who would win, Hercules or Superman?  To his credit, he turned it into an interesting story about him and Shaquille O'Neal.
Shaq is a big Superman fan and when he requested Kevin's signed photo, as a joke, Kevin wrote: Hercules could kick Superman's ass - Kevin Sorbo.
Shaq returned with a signed photo of his own: No - Shaq.
I also saw Jewel Staite and Nathan Fillion for their Firefly panel.  Some good stories but bad questions.  They handled it fairly well.
But the big geeky thrill for me was this: 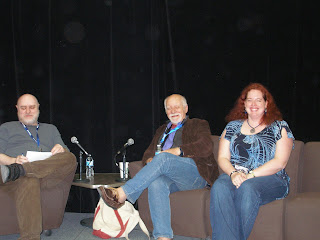 That's me, sitting next to Chris Claremont: the writer who created the best and most definitive X-men stories, who shaped my favourite characters: Wolverine, Storm, Colossus, Nightcrawler.  He was the writer for X-men for 20 years in the glory golden days of comics.  Listening to him talk about the series was amazing and worthy of it's own post.

No one else got a picture.  People were sitting down and I took a picture of him.  Then the host invited me to come up and get a shot on the couch.  Which I did faster than the Flash (or Quicksilver, depending on the universe).

I am still geeking out over the awesomeness. I got to see Chris Claremont!

The only thing I could be geekily happier over is if I got to see Joss Whedon or JMS.  Maybe next year.
Posted by Jennifer Mackintosh at 06:43