Alex had to wait a bit for his party, but I think it was worth it.  We invited his cousins, Logan and J.D., along with some of the kids from his class.  Nathan got to bring a friend as well, so it was a full house.

My parents had won a gift certificate for a magic show (www.themagicofscott.com) in a charity auction and had graciously offered to let Alex have the show for his birthday. 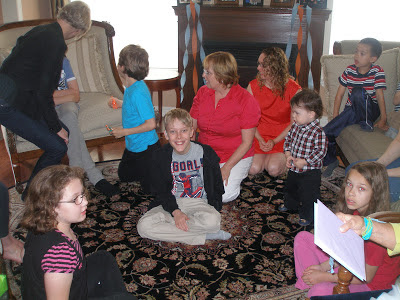 I have to give the magician full credit for both a good show and a good effort.  Children with autism are not the most responsive audience.  We had warned him to make his audience participation requests more direct, which he was good about remembering. 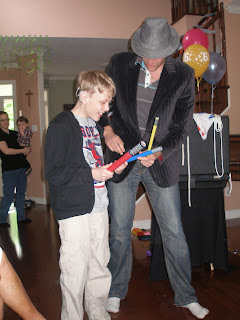 The kids were just delighted at the show.  One of Alex's friends was flabberghasted as the magician revealled wand after wand.  He was laughing as if being shown one of the secrets of the universe.
One of the tricks was a magic colouring book.  In order to colour in the pictures, the magician asked us to shout out all the colours of the rainbow.  So what does Nathan shout out?  "All the colours of the rainbow!"  It was quite cute.  He even got to be a volunteer. 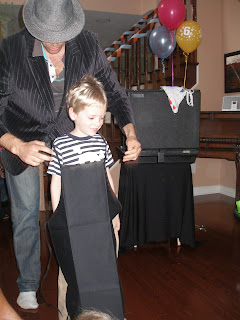 Alex volunteered for a trick as well but wasn't quite as enthusiastic.  However, he did enjoy the end when all of the children got to have balloon animals. 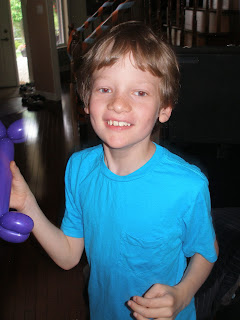 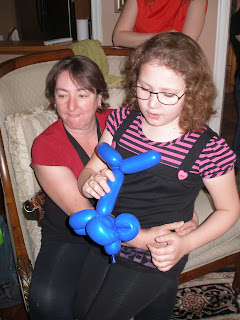 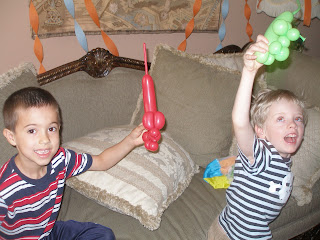 Everyone had a good time (whew!).  Alex especially liked his cake. 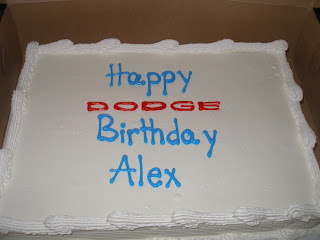 ﻿
For those who don't know, Dodge is Alex's favourite car brand.  The Dodge Grand Caravan is his absolutely favourite car.  We're not sure why, but it's guaranteed to put a smile on his face. 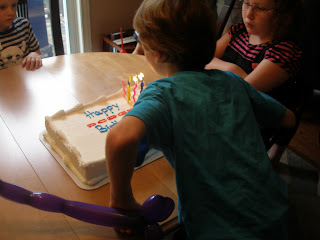 For me, I'm glad that birthday season has come to an end.  I'm glad I was able to make it special for everyone but it's a lot of work and I'm happy to move on to other things.  Like writing that pesky novel.﻿
﻿
﻿
﻿
﻿
Posted by Jennifer Mackintosh at 18:06