As the weather warms up, it's time to get started on home repairs.  So after a fun-filled birthday party on Saturday (I'll do a post with pictures when I'm slightly less tired), I settled down and worked on retiling the roof on Sunday.

Of course, the fact that its a dollhouse roof and my tiles are made of bristolboard and I'm using regular glue should in no way take away from my accomplishment.

Those who have been following know that I have been working on restoring the dollhouse my grandmother made for me when I was child.  I'd been dithering about whether or not to reshingle the roof since I would have to cut all the shingles by hand.  However, a fair amount of the roof was missing its tiles, so I realized I really had to do then.  I'd hoped to find something suitable and cheap online but I've since discovered that dollhouse materials are not cheap.

So I sat down and started cutting out strips of tiles from bristolboard with an exactoknife.  It's been a long and tedious process (taking me through one and half movies of the director's cut of Lord of the Rings).  Having sliced and diced two sheets, I figured I had enough tiles for my next step: repairing the turret roof.

There was a fair amount of damage to the tower.  The octagonal roof had been smashed into pieces.  With an unusual amount of foresight, I realized it would be easier to retile the sections before gluing them back into a roof.  Here is my first try: 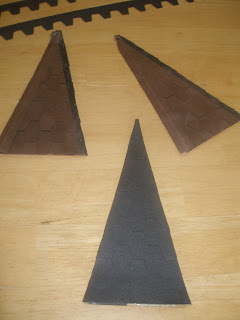 The two upper pieces are the original roof with the original tile.  You can see how much they've faded from the black strip along the side.  The middle one is the section I retiled.  I think my handcut tiles are a fairly good match for the machine cut ones originally provided in the kit. (You can see the tile strips I cut out at the top.)
I've always liked having something creative to work on while I'm stressed.  As much as I love writing, it doesn't work as well as an outlet.  What I write becomes contaminated by the upset I was trying to avoid.  But something practical that requires my hands more than my mind is perfect.  For the next little bit, this will be it.
Posted by Jennifer Mackintosh at 19:18