It is the beginning of birthday season for us and we started off with a family birthday party.  It's a little earlier than normal, but due to scheduling conflicts, it was the best option.

Nathan's been a little confused.  Usually we celebrate his birthday first, then the family party, then Alex's, then Mom and Dad's.  He keeps asking if the next day will be his birthday but he still has a few weeks to go at being five.

I went very low key for the decorations this year.  Last year I found adorable Dr. Seussian tissue puff-balls in the party store but it took me almost two hours to tease them into shape.  This year, I went with ready made options. 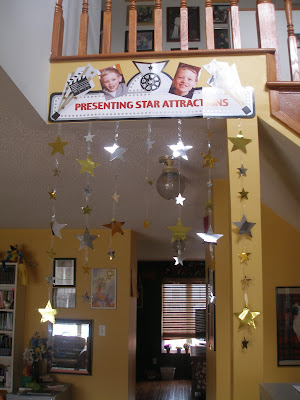 I do like the boys' pictures with the "Presenting Star Attractions" banner.  They are my little star attractions ... and probably the reason most of the family comes to the party.  Birthdays are never quite as much fun once children are no longer involved.
Alex's food sensitivities have always made birthday cake a tricky proposition.  A few years ago, we made a brilliantly obvious decision: ice cream cakes.  Alex likes soft serve ice cream and it saves me having to bake at least one cake.  Usually our local DQ has been good about making the whole cake from vanilla ice cream (no cookie crumb layer or chocolate soft serve).  This year, they forgot and Alex was not impressed.  He's doing better with food but dry crumbly cookie was enough to put him off it.  At least he liked the Elmo decoration. 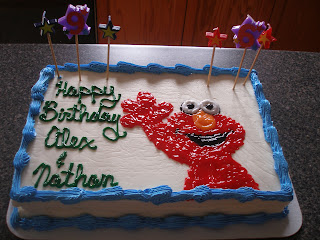 He and Nathan did very well with sharing the candles. 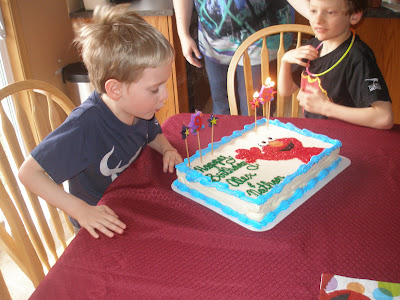 Nathan immediately demanded a piece with Elmo's eyes.  I'm not quite sure why, but I was happy to comply.
They received a wide variety of toys.  The immdediate hits were a Playmobil Ferry set: 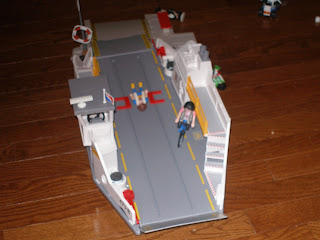 And a Pull and Go Thomas the Tank Engine toy which I could not get a picture of because Nathan has not let it go from his little fist.  They were given a generous amount of Lego which led to the following building project: 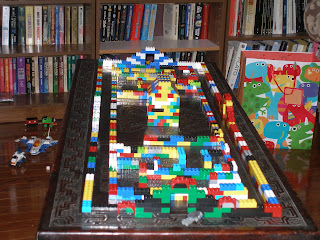 This is what happens when geeks have spare time and Lego.  A table top Lego maze which both boys marvelled at.  Nathan in particular was very excited about it and eager to participate.  Alex watched from a distance but he, too, got very excited about playing with it.  I'm hoping we can inspire him to use his Lego for more than laying out in patterns.
All in all, it was a very good party.  The minor crises were managed, everyone seemed to have fun and the pacing didn't seem rushed or tedious.  Clearly, I'm starting to get better at this.﻿
﻿
﻿
﻿
﻿
Posted by Jennifer Mackintosh at 16:09