Nathan's Beaver troupe had a sleepover at Cosmic Adventures over the weekend.  We were a little nervous about it, Nathan has a bad record of being upset when asked to sleep away from his bed.  But we decided to go ahead with it.  Dave and I would both go with him so he'd have lots of parental support.  Cosmic is just about the most fun place you could imagine to have a sleepover, which we hoped would encourage him.  And it was just one night so if it turned into a disaster, we'd be okay.

Once we'd decided, we began to hear horror stories from other parents who had done Cosmic sleepovers before.  How no one slept the entire night because of noise and lights from the various arcade games throughout the building.  How kids became rampaging monsters by about 2 am.  How they locked you into the building and you couldn't leave!  (That one was true, as it happened.)

Through ignorance or bravery, we decided to plunge ahead.  And I'm glad we did because it turned out to be a really fun time.

Nathan did great with listening to the Beaver leaders.  Dave and I were able to sit back in the cafeteria and just watch him play.  We even had time to accomplish our mandatory Child Safety Video (more on how that needed to be revised in another post).  He ran wild on the structure and had some fun with the arcade games. 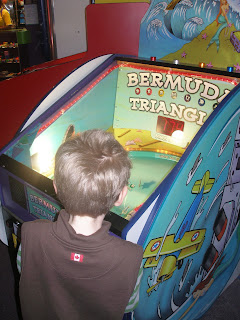 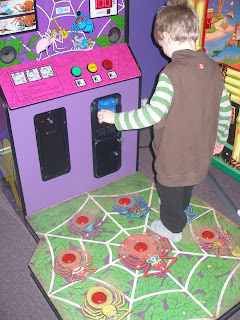 He participated in the Beaver campfire, although he got a little bored with some of the stories.  (Not surprising, I'd guess about a third of the kids were staring into space.)
They had activities until 10:30 at night, which meant that the kids were getting pretty tired in spite of their excitement.  We picked out our spot and laid out our sleeping bags and camping mats.  I was prepared to be listening to children chatting and playing well into the night but everyone was quiet by 11 or so.
Dave and I both slept better than we expected, despite an over-enthusiastic air conditioner.  (I'd worried our heavy sleeping bags would be too warm but I was glad of them before the night was over!)  Nathan woke up briefly in the night but settled back to sleep quickly.  He even slept in past the 6:30 wake up call.  He even woke up cheerfully for us. 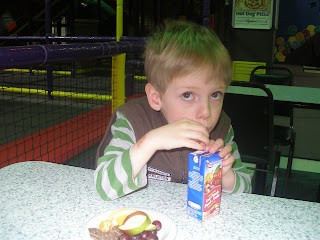 All in all, I'm calling this a highly successful adventure.  Maybe next year we'll ditch the sleeping mats and actually sleep in the structure.﻿
﻿
Posted by Jennifer Mackintosh at 18:00