Autism on the Hill

Today we took our boys to mingle with Senators and MPs as a real life demonstration of living with autism.

The boys were actually excited to go to Parliament Hill. 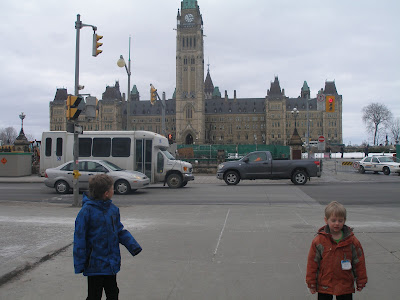 They were excited about going to the "castle building" with the "pointy windows", a fair description of our nation's Capital.
They gave several good demonstrations﻿ of life with autism.  As soon as he arrived in the room, Alex went right to the podium and began talking into the live mike.  "Hello everybody and welcome to our show!"  Luckily he got distracted before launching into "Rockabye Your Bear" from the Wiggles, but I still feel the point was made.
Alex was running around but Nathan curled up in a corner, overwhelmed by the number of people. 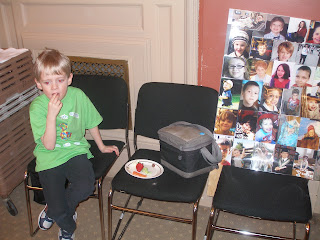 ﻿
After the first twenty minutes, both of them were buried in the iPads we'd brought.  I tried to get a picture of the two boys and Dave, all busily thumbing their tablets, but they didn't quite cooperate.
There were several points I was hoping to make but they didn't quite come through.  So I'm making them now:
- early intervention is critical and resource efficient.  The faster these kids can be diagnosed and treated, the better their outcomes are.  My boys are evidence of that.
- families with autism bankrupt themselves to pay for private therapy due to the gaps and delays in the publicly funded programs.  This affects everything from home ownership to retirement plans to college funds.  Having a child with autism should be taken into consideration when the government is deciding we're "too wealthy" to need help.
- the income caps on respite and other assistance programs should be re-examined, along with the tax rates.  Most programs have an income cap of $75 000 when you have one child with autism.  Having a second child raises it to $80 000.  Now do the math: a family paying the $30 000 per year for therapy for two children is left with $20 000 to live on, below the poverty line for a family of four.  But they're still taxed as if earning $80 0000.
I wish I could have had the opportunity to actually articulate these points to people with the power to actually do something about it but it was not to be.
The boys enjoyed making their escape.  Alex tried several times to figure out the exit-routine.  He shook hands, hugged people and thanked them (all typical preludes to leaving).  And yet we kept insisting he stay in the room.
Each of them had something to look forward to.  Nathan wanted to see the Eternal Flame again.  (Doesn't he look like the most adorable little patriot?) 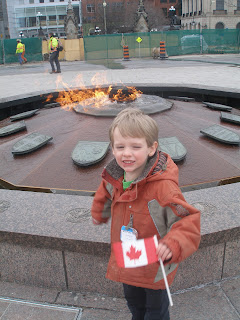 And Alex got to see the Stop/Arret sign on Parliament Hill and add the photo to his collection. (He has pictures of signs from all over the world which various family and friends have sent him over the years.) 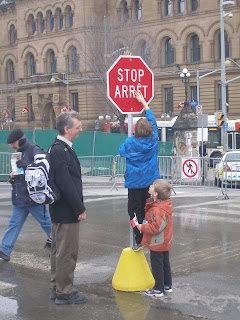 Posted by Jennifer Mackintosh at 17:27