When I was around twelve, my grandparents gave me a beautiful large handcrafted dollhouse.  I had many enjoyable hours playing with it and it survived reasonably well as it was transported to various homes across the country.

Unfortunately, the last few moves were the hardest.  Since it's been in storage, the tower has collapsed after having something heavy fall on it.  And Alex decided to try and take it apart, taking off the porch railing and some of the siding.  For its own protection, I put it in the basement, out of bounds of little hands. 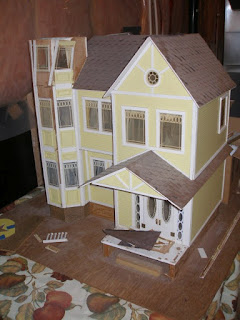 As you can see, the damage is fairly extensive.  However, Nathan has absolutely fallen in love with it.  Since he's been home from the cottage, he's been asking me to fix the house so he can play with it.  It took a little soul-searching on my part, since I'm worried about it being destroyed but I decided his request would at least prompt me to begin the much needed repairs.
﻿

I'm beginning with something simple: the porch railings.  Reconstructing the tower is going to be time-consuming but the porch damage is mostly cosmetic. 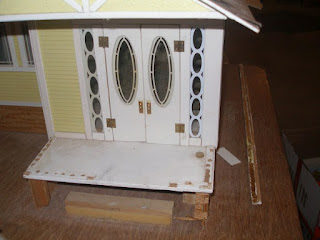 Where's Ty Pennington when you need him?

Posted by Jennifer Mackintosh at 16:45